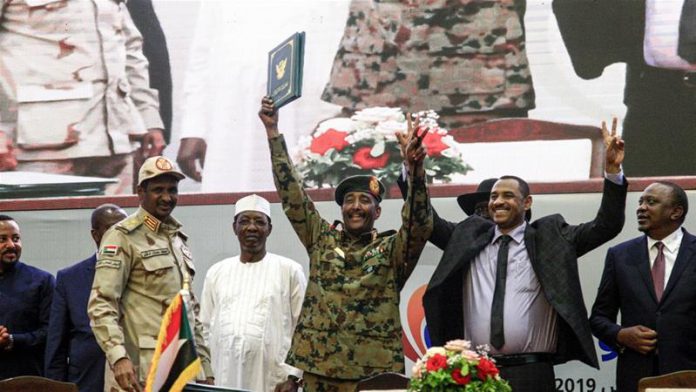 The Transitional Military Council and the Forces for Freedom and Change (FFC) have signed the final power-sharing deal in Khartoum this afternoon.

Presidents of Kenya and South Sudan as well as senior official from different countries, including Chairperson of the African Union Commission, Moussa Faki Mahamat, attended the signing ceremony.

In his remark at the ceremony, Prime Minister Dr Abiy said that “today is the beginning of a new chapter in the history of Sudan.”

“Your victory is a victory for us,” he added.

“Building democracy requires commitment to its principles as well as requires us to build institutions and work with each other,” he said.

The Prime Minister added that the Government of Ethiopia is committed to support Sudan during the transitional period.

Under the deal, a sovereign council, consisting of six civilians and five generals, will run the country until elections.

The two sides have agreed to rotate the chairmanship of the council for just over three years. A prime minister nominated by civilians is due to be appointed next week.

Ahead of the signing ceremony, the Premier also met members of the Forces for Freedom and Change (FFC).

During the meeting, they appreciated him for the role Ethiopia has played in facilitating the agreements, according to office of the Prime Minister.

They also expressed that the constitutional and political agreements will lay a foundation for sustainable democracy and development.

The Prime Minister for his part encouraged them to foster forgiveness and culture unity, noting that while successful negotiations are stepping stones, the more challenging journey remains ahead of them.