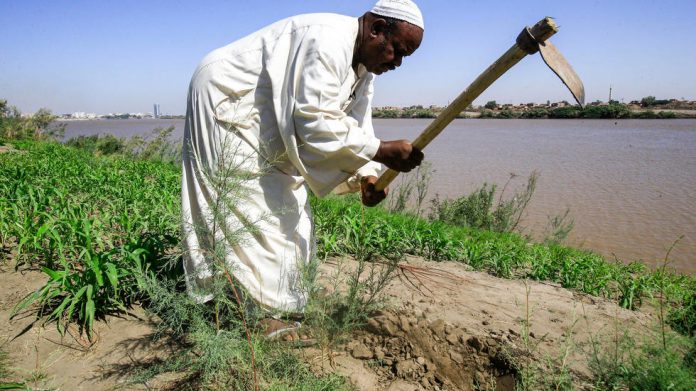 The Blue Nile is a renegade river, according to Sudanese farmer Osman Idris, its unpredictable flooding swallows crops and houses as it crashes through Sudan from Ethiopia on its way to Egypt.

“Tonight, the level of water will be low,” said Idris, a resident of Juref Gharb, a small village on the bank of the Blue Nile outside Khartoum.

“Tomorrow, it will swallow all the houses… It’s a renegade river, it rises so fast,” said the 60-year-old, dressed in a traditional Sudanese robe.

For Idris, Ethiopa’s construction of a controversial dam on the Blue Nile is a dream come true, as it promises to regulate the floods that inundate Sudan every rainy season.

This year alone, flash flooding has killed more than 60 and injured dozens in Sudan.

The Blue Nile joins the White Nile in Khartoum and supplies the overwhelming majority of the Nile’s water, which runs through Egypt to the Mediterranean Sea.

Ethiopia insists the $4 billion hydro-electric barrage is essential for its economic growth given that most of its population still lives without electricity.

And in Sudan, farmers hope the dam will provide predictable flow.

Over the years, farmers like Idris who own farms along the Nile have been forced to change their crops due to flood devastation and tonnes of deposited silt.

“I had to shift from cultivating fruits and vegetables to animal feed,” Idris told AFP.

Being reliant on flooding for irrigation means only one harvest per year and limits the kind of crops that can be grown.

If the river’s flow were regulated, more intensive agriculture could be practised, Idris said.

“We can plant crops through the year. It will be better for the environment and for marketing our products, which means more income for us,” Idris said.

Ekram Dagash, a professor at Khartoum’s Al-Zaiem Al-Azhari University, agreed that Sudan stands to gain from the dam, which will maintain water levels and block unwanted silt.

“Ethiopia is building the dam for one reason only, to produce electricity and export it, not only to neighbouring countries but to the whole African continent,” she told AFP.