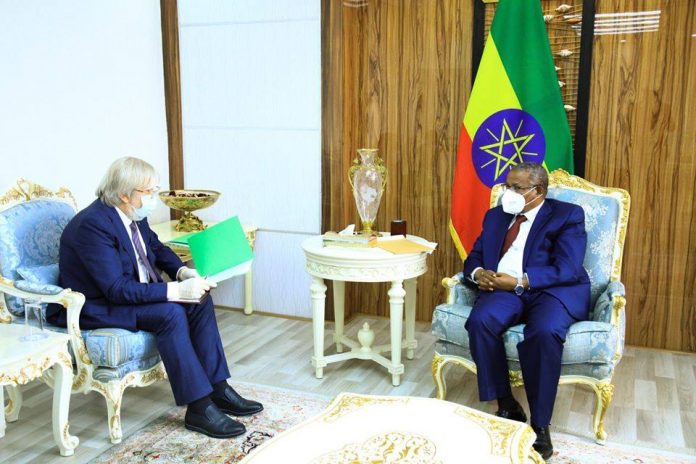 During their discussion held today (June 05/2020) Ambassador James Morgan said his country will never do anything that could harm Ethiopia. The ambassador in his statement said that ”South Sudan strongly supports Ethiopian right to use its resources”.

He also dismissed the recent report which has been circulated on social media that state South Sudan’s agreement with Egypt’s request to build a military base in Pagak. The ambassador strongly condemned the fake news and explained it as a baseless. Besides this, he also recalled the press release given to local media based in Addis Ababa that explained South Sudan’s stand with Ethiopia’s and neighboring countries interests.

The ambassador noted that his country will never forget the long-standing and cordial relationship between Ethiopia and South Sudan and hence, will never make any agreement with any nation having an interest to attack Ethiopia.

Mr. Gedu on his part expressed his strong belief that the claims are unfounded adding that South Sudan will not have any justifiable reasons to engage in activities that would harm the brotherly relationship of the two countries.

In their discussion about the construction, filling and operation of the Grand Ethiopian Renaissance Dam, the ambassador told Mr. Gedu that Ethiopia has got the right to equitably utilize its resources under the auspices of the accepted principles of ‘causing no significant harm’ and cooperation.

In concluding their discussion, the ambassador thanked the government of Ethiopia for donating medical supplies to his country’s efforts in fighting the COVID-19 pandemic.

Source:- The ministry of Foreign affairs of Ethiopia