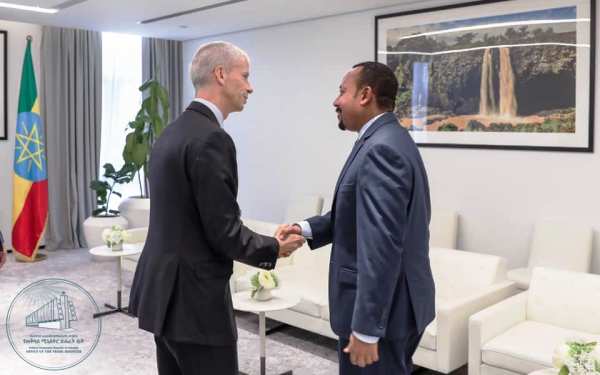 Prime Minister Dr Abiy Ahmed received Minister of Culture of the French, Franck Riester, at his office this morning.

During the meeting, they discussed progress on the restoration work of the rock hewn churches of Lalibela and the Jubilee Palace, currently being supported by France, according to office of the Prime Minister.

Noting the strengthened relations between the two countries, the Prime Minister recounted the immense support of President Emmanuel Macron and encouraged expediting the restoration works.

Mr. Riester expressed his visit as a commitment of the President Macron to the preservation of heritage important to both countries, and to sharing technical expertise and skills.

While studies to determine restoration needs are nearing completion for the Jubilee Palace, the technical work is expected to begin in a few months towards readying the Palace for tourism, the office indicated.

Developing the tourism sector is one of the pillars of job creation and attracting investments for the government of Ethiopia. Preservation of heritage sites is therefore one of key priority areas in the sector, it added.

The French Minister yesterday visited and officially launched the renovation project of the rock-hewn churches of Lalibela, one of the UNESCO World Heritage sites in Ethiopia.