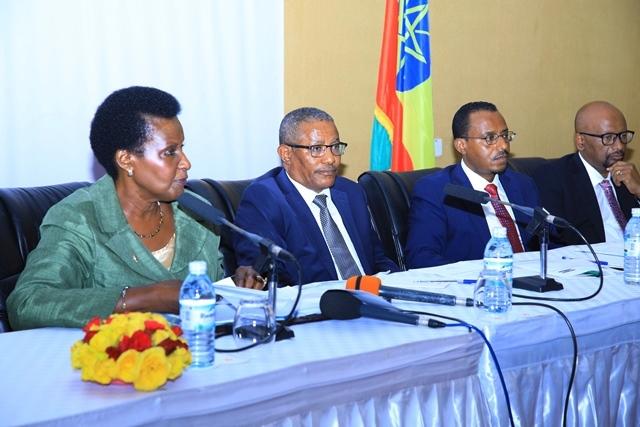 The Ethiopian ambassador, Alemtsehay Meseret, has commended Uganda for the role the country continues to play in promoting equitable utilization of River Nile.

The envoy said Uganda, which hosts the Nile Basin Initiative (NBI), continues to play a pivotal role in promoting the implementation of the Cooperative Framework Agreement (CFA) for the Nile.

The agreement, which seeks to promote equitable use and access to the Nile waters, replaced the 1929 and 1959 colonial treaties that required countries in the upstream to seek permission from Egypt before undertaking any projects on the trans-boundary resource.

“We are happy about the position of President Yoweri Museveni on the equitable use, rights and access to the Nile by countries in the basin. Uganda hosts NBI and continues to promote the implementation of CFA,” Alemtsehay said.

She was speaking during the dinner after the third Ethio-Uganda joint ministerial commission meeting at her residence in Kololo, an upscale Kampala suburb, on Thursday.

The agreement, the ambassador, noted is the best instrument the Nile basin countries have now to promote equitable access and protection of the trans-boundary river.

“We are happy that Uganda and many countries in the region have ratified the agreement and our bilateral cooperation and relationship continues to grow. We are now talking about integration of the two countries,” Alemtsehay noted.

The ministerial commission was set up to facilitate trade and investment between the two countries. The Ethiopian and Ugandan ministers met Museveni at State House, Entebbe, before concluding their meeting in Kampala.

“Trade and investment are high on our agenda now. We have a combined population of about 150 million people. We need to trade and there are opportunities,” the envoy stated.

The state minister for foreign affairs, Henry Okello Oryema, said relevant ministers from the two countries are currently implementing directives from the Ugandan and Ethiopian leaders to facilitate trade and investment.

“We have to trade. We have to implement the directives of the two leaders on infrastructure and trade and investment. The progress is good so far,” he added.